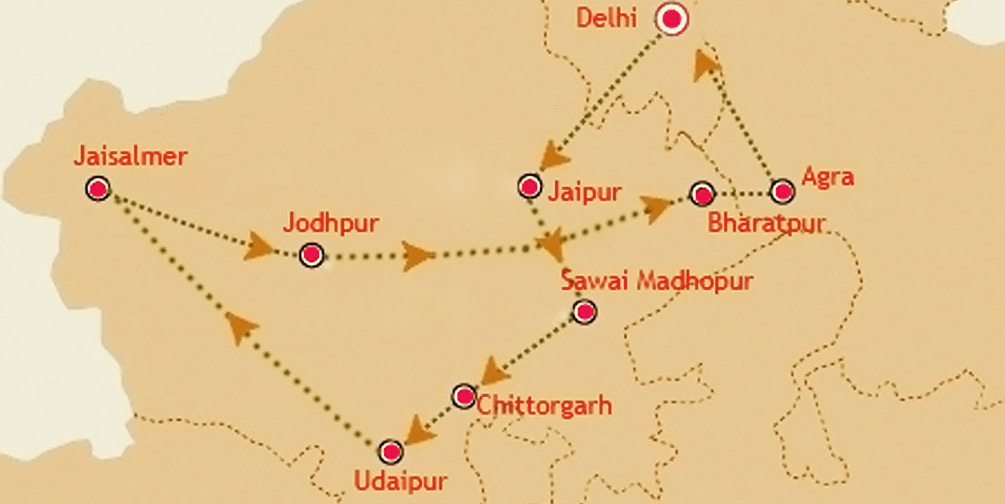 Palace on Wheels is a luxury train that takes on a complete tour of Rajasthan and surrounding areas. The top destinations reached by this train includes Jaipur, Jaisalmer, Jodhpur, Ranthambore, Chittorgarh, Udaipur, Bharatpur and Agra.

The trip starts and ends in New Delhi.This is the capital of the country and Delhi has an international airport that connects many important international tourist destinations. The train has only one itinerary that stretches for seven nights and eight days.

As the train reaches Udaipur, you come closing towards the Thar Desert. The city of Udaipur is a romantic place with numerous palaces and a lake that does mesmerizing magic to your holiday. After enjoying the city of lakes, the train goes to the deep and unique city of Jaisalmer; the land of desert. After a day in the desert land, the train slowly turns towards Jodhpur.

By the end of the day, the train would have already started from Jodhpur and would have reached the corners of the state and entered Bharatpur which is near to Jaipur. The tour of the train focuses only on Keoladeo Ghana park in Bharatpur. Birdwatching is an important tourist activity in this park. From Bharatpur, the train enters to Agra which is famous for the world wonder. After tourist activities in Agra, the train gets back to the capital of the country and its final destination, New Delhi.

This route map includes all important and interesting destinations available in this region. If you want a classic holiday, book your tickets today in Palace on Wheels.